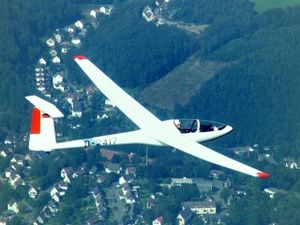 The Glasflügel 401 "Kestrel" is a glider, that has been developed 1968 for the open class.

The Kestrel can be seen as the prototype of the today 18 meter class. The ship was ahaed of its time and is even today very popular with a spacios Cockpit and a good consensus of performance and agility.

Over the years many competitions and records could be won with a Kestrel. Non-pilots in Europe may have heard of it in the 70ies through news, books or films about Jochen von Kalckreuth, who flew many records at that time in the Alps. Recently, in May 2005, Gordon Boettger flew about 2.050 km with his Kestrel in waves along the Sierra Nevada in the USA.