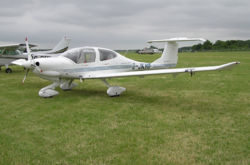 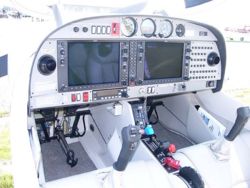 The Diamond Star DA40 is a four-place single-engine composite airplane notable as a popular modern training and private aircraft. It is made by Diamond Aircraft Industries.

The DA40 is available in three main versions:

The DA40-TDI became available in North America only in 2006, much later than it did in Europe. The diesel engined TDI has outsold the avgas engined 180 (and XL and FP) in Europe by some margin. The DA40-180 is prevalent at flight schools and in private hands in North America.

While past DA40 models were available with both traditional mechanical instrumentation, as well as with the optional Garmin G1000 glass cockpit suite the current DA40 offerings come with the Garmin G1000 as standard equipment.

A joint venture has been set up in China with Shandon Bin Ao Aircraft Industries for production of the DA40 in Shandong Province. Capacity is available for up to 1,000 aircraft a month to be produced with certification by the European Aviation Safety Agency planned for the second quarter of 2006[1].