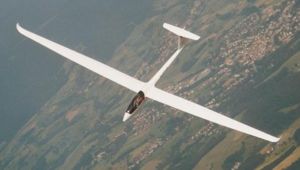 The Rolladen-Schneider LS10-a is a prototype 18 metre sailplane that first flew in 2003 and currently is in pre-production development at DG Flugzeugbau.

By the mid-nineties Rolladen-Schneider, prompted by customers, began designing a successor to the LS6. Development was protracted, as the LS8 and LS9 projects had higher priority and the company's owner, Walter Schneider, felt the LS6 was still competitive.

The initial design was made under the direction of Wolf Lemke. Werner Scholz then developed the prototype, the LS10-a. Although early 3-view drawings of the LS10 showed a curved canopy rail similar to that of the ASW24, when the prototype was revealed it had the same straight canopy rail as the LS6 and LS8.

The first flight took place at Egelsbach on 6 June 2003. This was followed by extensive flight-testing and then evaluation in competitions. The prototype won the Hockenheim and Bayreuth contests in 2004 and the German Nationals in Lüsse in 2005. It took second place in the 2005 European Championships in Nitra, Slovakia. The flying qualities were reported in the German aviation magazine, Aerokurier, to be excellent.

DG Flugzeugbau expects to start serial production of the LS10 at the beginning of 2007. The company is engaged in an extensive redesign to reduce production costs, and is completing the usual lengthy certification process.

A 15 metre version is likely to be developed in the future. A ‘turbo’ version LS10-st is also planned, using the same engine installation as the LS8-st.

Design of the wing

The LS10 differs from the LS6 mainly in its wing; its other features are similar. The aerofoil was derived from the FX 81-K-130 profile used in the LS6, having as improvements: higher performance at the low and high ends of the speed range, and very low sensitivity to turbulence, rain and bugs. The wings have turbulator tape on the underside to prevent laminar separation bubbles. This suggests the profile lacks the clean natural transition of the Wortmann profile of 1981 and is probably more extensively laminar.

The initial design had an elliptical leading edge similar to the SZD-55-1. However the prototype adopted a triple-tapered shape that is easier to build and - most importantly - to repair. The production version will have a thicker profile at the wing root, especially modified for the turbulent flow in the vicinity of the fuselage (as with other recent gliders including the LAK-17a, ASW 28, DG-1000, Discus-2 and the eta).

The wing is built in four parts. By changing wing tips, 15 and 18 metre spans will be possible. The partition line for the wing extensions was considerably inboard in the prototype, a feature that first appeared in the Schempp-Hirth Ventus 2c and which allows optimal planforms for both spans and easier rigging. The series production, however, will have the partition seven metres from fuselage axis, as DG-Flugzeugbau decided to give priority to structural and constructional considerations that favoured a location farther towards the wingtip.