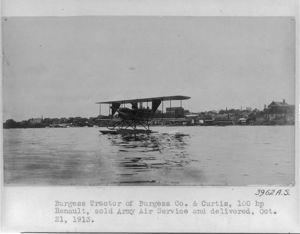 Powered by a 70 hp Renault engine with the propeller in the tractor configuration, the biplane trainer had tandem open cockpits after a redesign in 1914 by Grover Loening, then a civilian engineer with the U.S. Army. Loening was the first person to receive an advanced engineering degree in aeronautics, from Columbia University in 1910, and later was a founding member of both Sturtevant Aircraft Company and Loening Aircraft Engineering.

The Aeronautical Division, U.S. Signal Corps purchased five Burgess H airplanes for the 1st Aero Squadron at North Field, California. They were the 24th through 28th aircraft acquired by the Army. A sixth Model H went to the U.S. Navy, where it was known first as the D-1 (Burgess Flying Boat, Model 1) and later as the AB-7 (Heavier-than-air/flying boat, model 7).