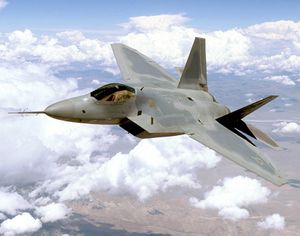 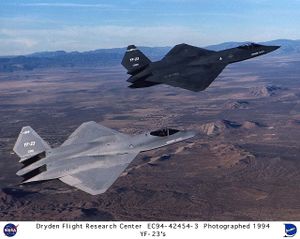 In 1981, USAF developed a requirement for a new air superiority fighter intended to replace the capability of the F-15 Eagle. It was envisaged that the ATF would incorporate emerging technologies including advanced alloys and composite material, advanced fly-by-wire flight control systems, higher power propulsion systems, and low-observable, or stealth technology.

An RFP was issued in July 1986, and two contractor teams, Lockheed/Boeing/General Dynamics and Northrop/McDonnell Douglas were selected in October 1986 to undertake a 50 month demonstration/validation phase, culminating in the flight test of two prototypes, the YF-22 and the YF-23.

Following a hard-fought fly-off competition, in August 1991 the YF-22 was declared the winner and the Lockheed team was awarded the contract to develop and build the Advanced Tactical Fighter.

The production version of the aircraft, the F-22 Raptor was unveiled on April 9, 1997, at Lockheed-Georgia Co., Marietta, Georgia, and conducted its first flight on September 7, 1997. The Raptor achieved initial operational capability on December 15, 2005.